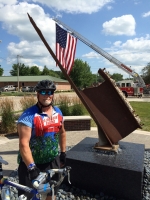 In 2004, after almost 10 years there, I then moved with my wife, Heather, to Clear Lake to work as a 7th Social Studies teacher and coach. It was tough to leave a great group of guys on the GFD but it only made sense to move closer to both of our places of employment. The move shortened my wife's travel to Mercy Medical Center in Mason City where she works in the Critical Care Unit. After living in Clear Lake for a few months I applied to the Clear Lake Fire Department. Six months later I was voted on as a memeber in 2005. While being here I've attended classes on the Art of Reading Smoke, Flashover Training Simulator, Hybrid Vehicle Awareness, Aerial Ladder Ops, and Top 10 Fire Scene Mistakes. In September of 2008 I was promoted to the position of Lieutenant and Training Officer on the CLFD. Moving up the ranks of the CLFD, in 2014 I was promoted to one of two Captains positions. This is great group of CLFD members and I look to work with all of them to make our training the best it can be to ensure our safety on any scene we are called to.

My wife Heather and I have three boys Cade Thomas Hartwig 6/11/06-8/16/16 our very special angel in heaven, Reid 9 and Brycen born on September 26th, 2018. The boys keep us busy but we enjoy every moment with them. Our boys love to come to the fire station, see the trucks, and " the guys". My wife and boys are the love of my life and I would do anything for them.

We are huge Iowa Hawkeye fans We also are huge fans of the Minnesota Vikings, Twins, and Chicago Cubs.

This site has been viewed 412,456 times.
News
Events
Pictures
Apparatus
Maintained by the members and staff of Clear Lake Fire Department. Designated trademarks and brands are the property of their respective owners. Copyright © 2006-2021. YourFirstDue Inc. All Rights Reserved. Content on this web site is supplied by Clear Lake Fire Department. YourFirstDue Inc. cannot be held responsible or liable for any content, text, pictures, or any other media found on this web site.
Management login
Powered by