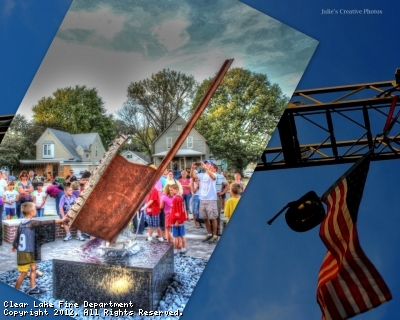 The official unveiling and dedication ceremony for the 9/11 steel memorial was Tuesday September 11th, at 6:30pm at the Clear Lake Fire Station. Many have worked hard and donated monies, time, and resources to make this tribute to those who made the ultimate sacrifice a reality.

We will dedicate this reminder of terror, a celebration of brotherhood, to tighten the bond of all who were touched that horrible day in 2001.
Generous donations by Clear Lake Bank and Trust, Country Landscapes, Henkel Construction, Pritchard Family Auto Stores, Ray Cooper, and Clear Lake Noon Lions have made this memorial a reality. The tribute is a public display of an artifact that was salvaged from the World Trade Center after the attacks September 11th 2001. It was given to the Clear Lake Fire Department by the victims of 9/11 Families and the Port Authority of NY/NJ and was brought to North Iowa May 19th 2011 by eleven members of the CLFD. 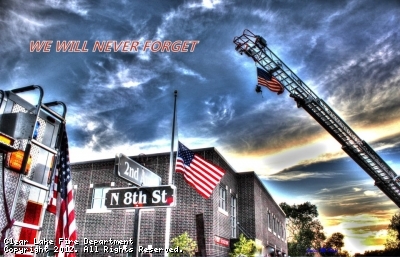 At the corner of North 8th St. and 2nd Avenue North, is the site at which the 9/11 steel memorial will rest forever.
The main gateway into downtown Clear Lake at its place in front of the new fire station.
The well planned design invites those passing to stop and recollect. A proud tribute for all Americans...so we will all… NEVER FORGET 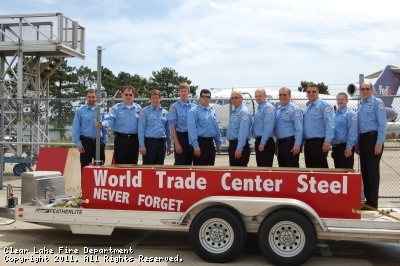 This site has been viewed 421,619 times.
News
Events
Pictures
Apparatus
Maintained by the members and staff of Clear Lake Fire Department. Designated trademarks and brands are the property of their respective owners. Copyright © 2006-2022. YourFirstDue Inc. All Rights Reserved. Content on this web site is supplied by Clear Lake Fire Department. YourFirstDue Inc. cannot be held responsible or liable for any content, text, pictures, or any other media found on this web site.
Management login
Powered by